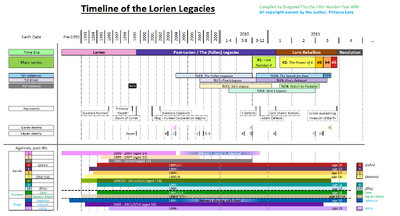 This article is a subpage of Timeline. It details the events happening in the Lorien Era, before Lorien faces its doom during the Mogadorian invasion, at a time when its land and inhabitants still thrive.

Codes to the novels / novellas are appended in the table below. Brackets, where applicable, direct to the specific chapter of the book. For consistency purposes, the Garde's names are all represented in their numbers.

For the derivation of dates, refer to the relevant section of the main article.

Timeline of the Lorien Era[]

Community content is available under CC-BY-SA unless otherwise noted.