Fugitive Six is the second Novel from the Lorien Legacies Reborn series. It was released on June 26, 2018.

The Human Garde Academy was created in the aftermath of an alien invasion of Earth. It was meant to provide a safe haven for teens across the globe who were suddenly developing incredible powers known as Legacies.


An organization that has dark roots in the Loric's past, untold resources, and potentially even a mole at their own school. Now these friends, who have become known to other students as the “Fugitive Six,” must work together to bring this mysterious group to an end before they can hurt anyone else. With the help of Nine, Taylor develops a plan to become the mole in the Foundation. Meanwhile, Caleb is promoted to Earth Garde and soon leaves the Acdemy to join Wade Sydal, where he finds the truth about the Anti-Garde weapons. With that happening, Taylor quickly finds her way into the Foundation and Nigel, after an encounter with his mother, finds she is the one behind the Foundation. Isabela finds herself with Einar, and Kopano and Ran find themselves in the government’s hands. Clone to the end of the book, The Fugitive Six meet up again and have a battle that determines the rest of their lives with Nine, Five, Einar, and more. 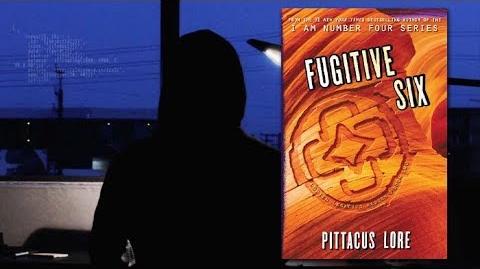 Promotion to the anticipation[]

"Make no mistake, a war is what is happening. A great battle for control of people like you.”

"Perhaps we should live to fight another day.” 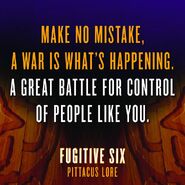 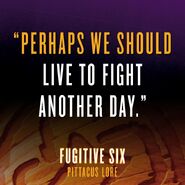 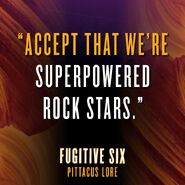